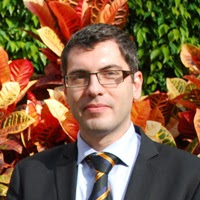 Rami Majzoub is the Executive Vice President heading the Africa & Middle East area at Junior Chamber International, the largest international NGO counting nearly 200,000 young active citizens in the world. He has also been raising funds for the Lebanese American University for the last three years, after spending eleven years with Thomson Reuters as the Media Sales Manager for 13 countries in the East Mediterranean & North Africa.

He obtained his BS in Computer Science from the Lebanese American University and his MBA from the Ecole Superieure des Affaires (ESA- run by the Chambre de Commerce et d’Industrie de Paris). Rami speaks English, French, Arabic and a fair amount of Spanish and Bulgarian.  Rami's hobbies are social media and international diplomacy and as such he is   currently serving as the Advisor of Diplomatic Affairs for the Lebanese Minister of Telecom HE Nicolas Sehnaoui. Rami is married and the proud father of two young boys.